Greetings from David, Marlene and Karissa Groves, or what we call Buffalo Groves Bloodhound Ranch!

We aren't the biggest Bloodhound  Breeder (or Buffalo Ranch) and that's okay, we are quality over quantity, and love educating & advocating for Purebred Bloodhounds! 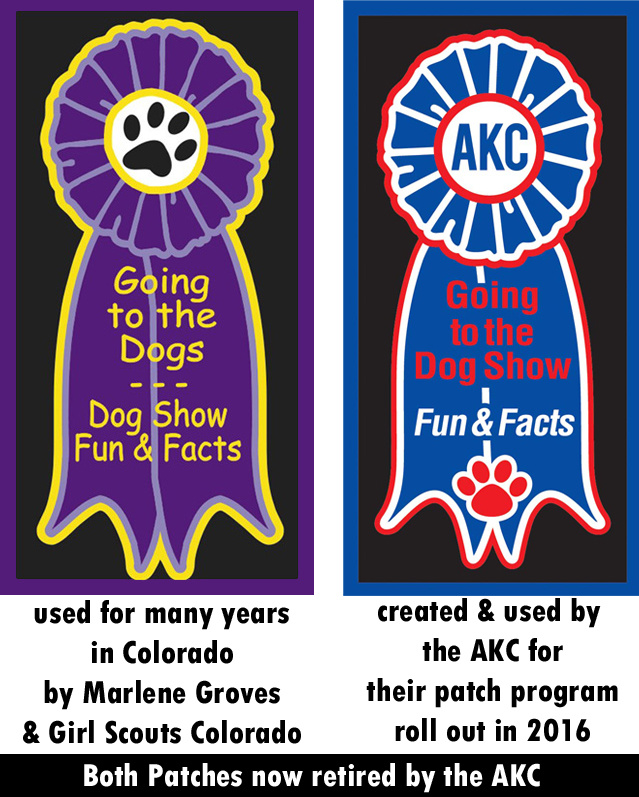 They are shared here FREE as downloadable PDFs.

In addition to these Bloodhound Educational items,

is also the Developer of the initial Dog Show Patch Program

which she ran in Colorado for many years in conjunction with Girl Scouts Colorado,

until 2016, when Marlene Groves gifted all her works (for free) to the AKC

(American Kennel Club) so they could expand and offer the program nationwide.

Our Summary Of Bloodhound History

This is condensed bloodhound history based on many hours of reading and research.  Therefore we present it as the best information we can offer.

1000-2000 BC - There is a plaque from Ancient Babylon of a type of a bloodhound with a tail curled over it's back.

(Photo  below is courtesy of the British Museum.)

630-699 BC - In the Nineveh Palace there is an illustration of an ancient for that history refers to as a bloodhound/mastiff.

727 AD - The French Monastery, beginning with St. Hubert, bred bloodhounds with great noses, courage, endurance and throatiness.  Most of these dogs were black with some red/fawn accents.  St. Hubert is generally thought to be the beginning for true bloodhounds.

1066 AD - St. Hubert Hounds came to England and were often a gift for royalty.

1066 AD - Talbot hounds existed and were white.  They were later crossed with St. Hubert Hounds. 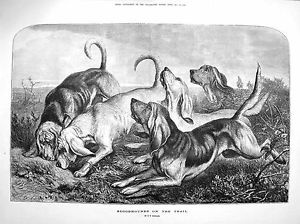 1270-1307 AD - The Medieval Times of Robert the Bruce and William Wallace,  at during this time Sleuth Hounds (Bloodhounds) were often used to track and hunt down people. 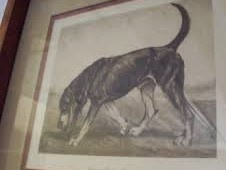 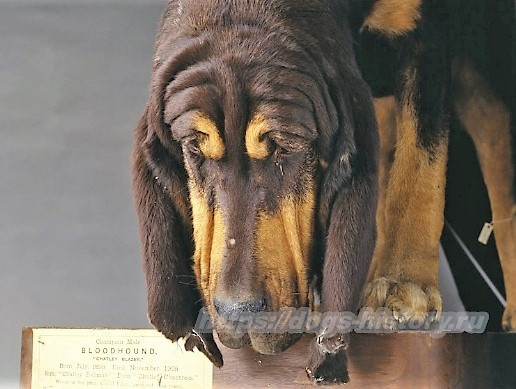 1905 - Champion Chatley Blazer - Print on the Left;  Taxidermy on the Right. 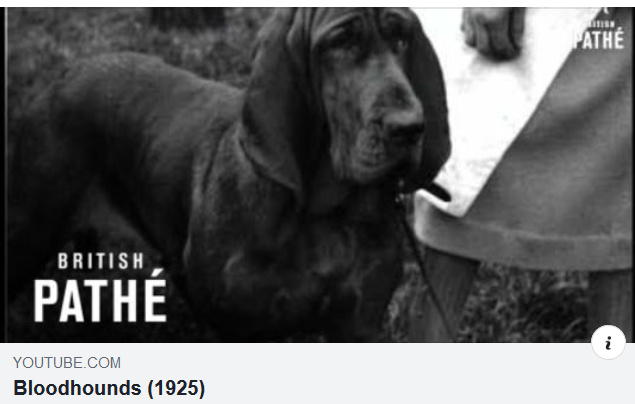 1888 - There were 3 Bloodhounds entered at the Westminster Kennel Club Dog Show in New York.

1910 - The American Kennel Club had about 200 Bloodhounds registered (compared to 2,370 registered collies which were the most popular breed at the time). 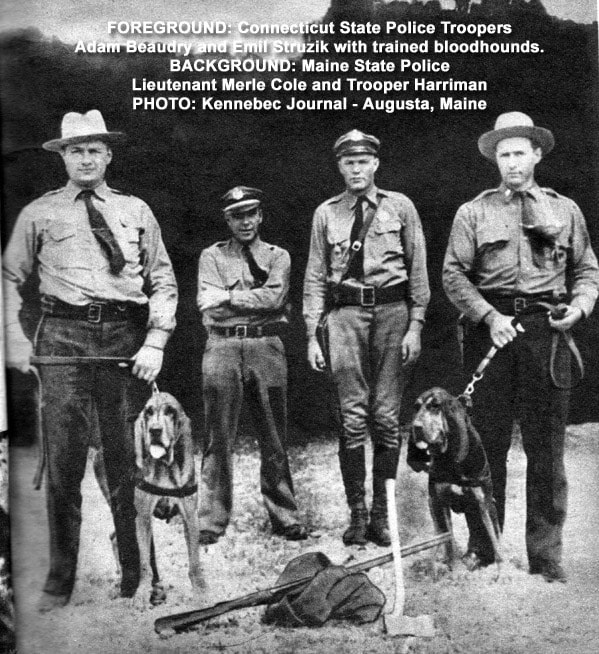 1952 - The American Bloodhound Association was established to encourage and promote quality purebred bloodhounds. 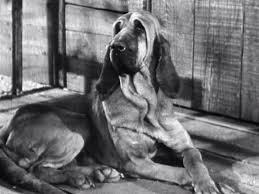 2005 - The American Kennel Club had 3,112 Bloodhounds registered and that year a Bloodhound (Knotty) won the Eukanuba National Championship Dog Show.

2019 - Bloodhound Man-Trackers K9's Radar & Lucy  aided the FBI and then with testimonial evidence to convict Patrick Frazee of murder.

No they are not blood thirsty dogs....

Its not because they smell blood (but they can)...

It actually stems from being "blooded"

which means of pure blood or pure breeding...

The Amazing Abilities of a Bloodhound

They are literally designed to sniff/smell

and to process scents (and they love it)! 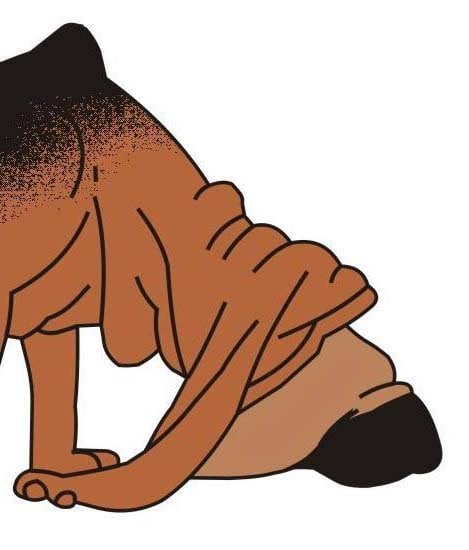 - they have large nostrils to breath in scent/smells

- the nostril shape even allows for more inflow

- olfactories are what process scents/smells

( compared to humans with about 6 million)

A little about Scent and Dander: 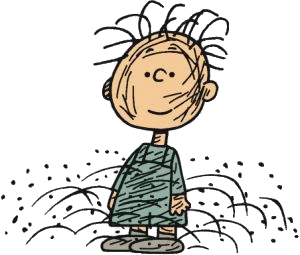 Tracking -versus- Trailing
Tracking (also called Man-Tracking)
is really following a scent "track"
more so the actual foot steps of the "track"
Trailing (also called Man-Trailing)
is truly following the scent "trail"
which due to weather, etc.
it may or may not be on the foot "track"
Law Enforcement & SAR (SearchAndRescue)
often uses and interchanges the terms
Tracking & Trailing
as for them, the bottom line, is to find
the mission person, lost child, cadaver,
criminal, criminal evidence, etc.
Bloodhounds can be excellent Cadaver Dogs
that find decomposing human remains
(bodies, body parts, bones, blood, tissue, etc.) 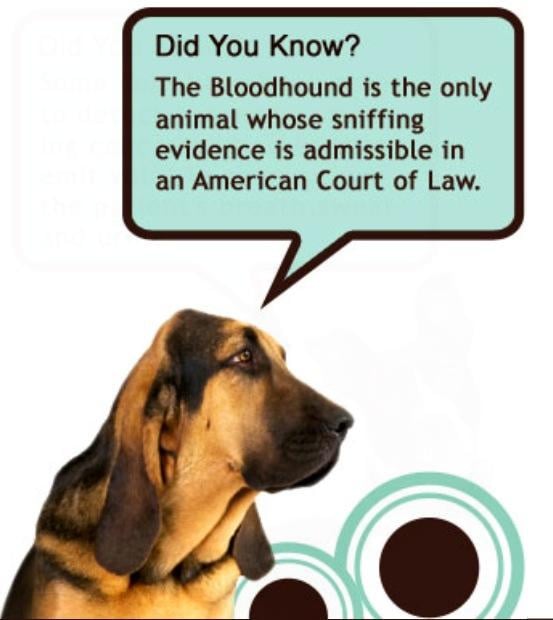 Dogs Smell in 3D
Dogs smell differently with each nostril
(a bit like we see differently with our eyes
and then our brain combines it)
Dogs take the different scents for each nostril
and it is combined
Dogs can even Smell Underwater
in part due to the 2 holes in their skulls
allowing dogs to draw in scent without inhaling
they also dive underwater with mouths opened
bringing in scents without inhaling
Bloodhounds also Air Scent
(smell scents in the air, not on the ground or objects)
Bloodhounds can Work a Trail
for Hundreds of Miles
that is Weeks Old
even Years Old for Evidence
and Hit on just 1 Drop of Blood
Bloodhounds are Proven (not Certified)
Proven by  records, cases, finds, etc.
Certified is just an annual test (not real work) 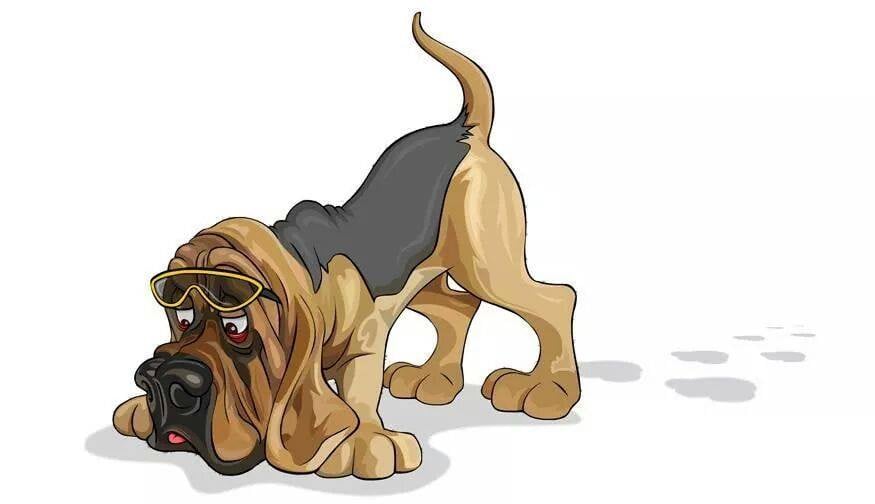 General Character:   The Bloodhound possesses, in a most marked degree, every point and characteristic of those dogs which hunt together by scent (Sagaces). He is very powerful, and stands over more ground than is usual with hounds of other breeds. The skin is thin to the touch and extremely loose, this being more especially noticeable about the head and neck, where it hangs in deep folds.

Height:  The mean average height of adult dogs is 26 inches, and of adult bitches 24 inches. Dogs usually vary from 25 inches to 27 inches, and bitches from 23 inches to 25 inches; but, in either case, the greater height is to be preferred, provided that character and quality are also combined.

Weight:  The mean average weight of adult dogs, in fair condition, is 90 pounds, and of adult bitches 80 pounds. Dogs attain the weight of 110 pounds, bitches 100 pounds. The greater weights are to be preferred, provided (as in the case of height) that quality and proportion are also combined.

Expression:  The expression is noble and dignified, and characterized by solemnity, wisdom, and power.

Temperament:  In temperament he is extremely affectionate, neither quarrelsome with companions nor with other dogs. His nature is somewhat shy, and equally sensitive to kindness or correction by his master.

Head:  The head is narrow in proportion to its length, and long in proportion to the body, tapering but slightly from the temples to the end of the muzzle, thus (when viewed from above and in front) having the appearance of being flattened at the sides and of being nearly equal in width throughout its entire length. In profile the upper outline of the skull is nearly in the same plane as that of the foreface. The length from end of nose to stop (midway between the eyes) should be not less than that from stop to back of occipital protuberance (peak). The entire length of head from the posterior part of the occipital protuberance to the end of the muzzle should be 12 inches, or more, in dogs, and 11 inches, or more, in bitches. Skull-- The skull is long and narrow, with the occipital peak very pronounced. The brows are not prominent, although, owing to the deep-set eyes, they may have that appearance. Foreface--The foreface is long, deep, and of even width throughout, with square outline when seen in profile. Eyes--The eyes are deeply sunk in the orbits, the lids assuming a lozenge or diamond shape, in consequence of the lower lids being dragged down and everted by the heavy flews. The eyes correspond with the general tone of color of the animal, varying from deep hazel to yellow. The hazel color is, however, to be preferred, although very seldom seen in liver-and-tan hounds. Ears--The ears are thin and soft to the touch, extremely long, set very low, and fall in graceful folds, the lower parts curling inward and backward. Mouth--A scissors bite is preferred, level bite accepted.

Wrinkle:  The head is furnished with an amount of loose skin, which in nearly every position appears superabundant, but more particularly so when the head is carried low; the skin then falls into loose, pendulous ridges and folds, especially over the forehead and sides of the face. Nostrils--The nostrils are large and open. Lips, Flews, and Dewlap--In front the lips fall squarely, making a right angle with the upper line of the foreface; whilst behind they form deep, hanging flews, and, being continued into the pendant folds of loose skin about the neck, constitute the dewlap, which is very pronounced. These characteristics are found, though in a lesser degree, in the bitch.

Neck, Shoulders and Chest:  The neck is long, the shoulders muscular and well sloped backwards; the ribs are well sprung; and the chest well let down between the forelegs, forming a deep keel.

Legs and Feet:  The forelegs are straight and large in bone, with elbows squarely set; the feet strong and well knuckled up; the thighs and second thighs (gaskins) are very muscular; the hocks well bent and let down and squarely set.

Back and Loin:  The back and loins are strong, the latter deep and slightly arched. Stern--The stern is long and tapering, and set on rather high, with a moderate amount of hair underneath.

Gait: The gait is elastic, swinging and free, the stern being carried high, but not too much curled over the back.

Color: The colors are black and tan, liver and tan, and red; the darker colors being sometimes interspersed with lighter or badger-colored hair, and sometimes flecked with white. A small amount of white is permissible on chest, feet, and tip of stern. 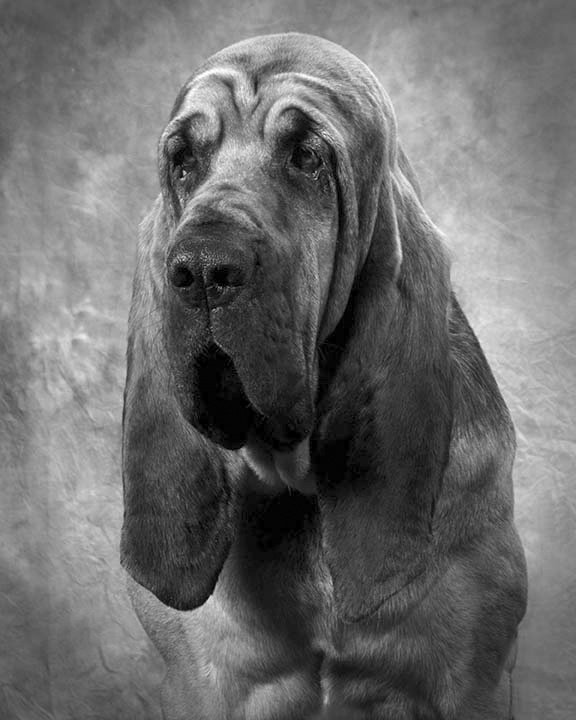 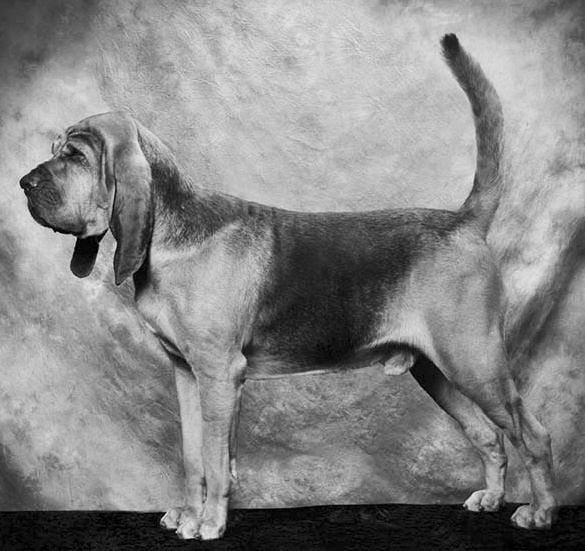 We think Bloodhounds are Wonderful Family Pets and they  Enjoy doing  Therapy Work and Public Education, can be Successful  Show Dogs and are Amazing Working K9's! 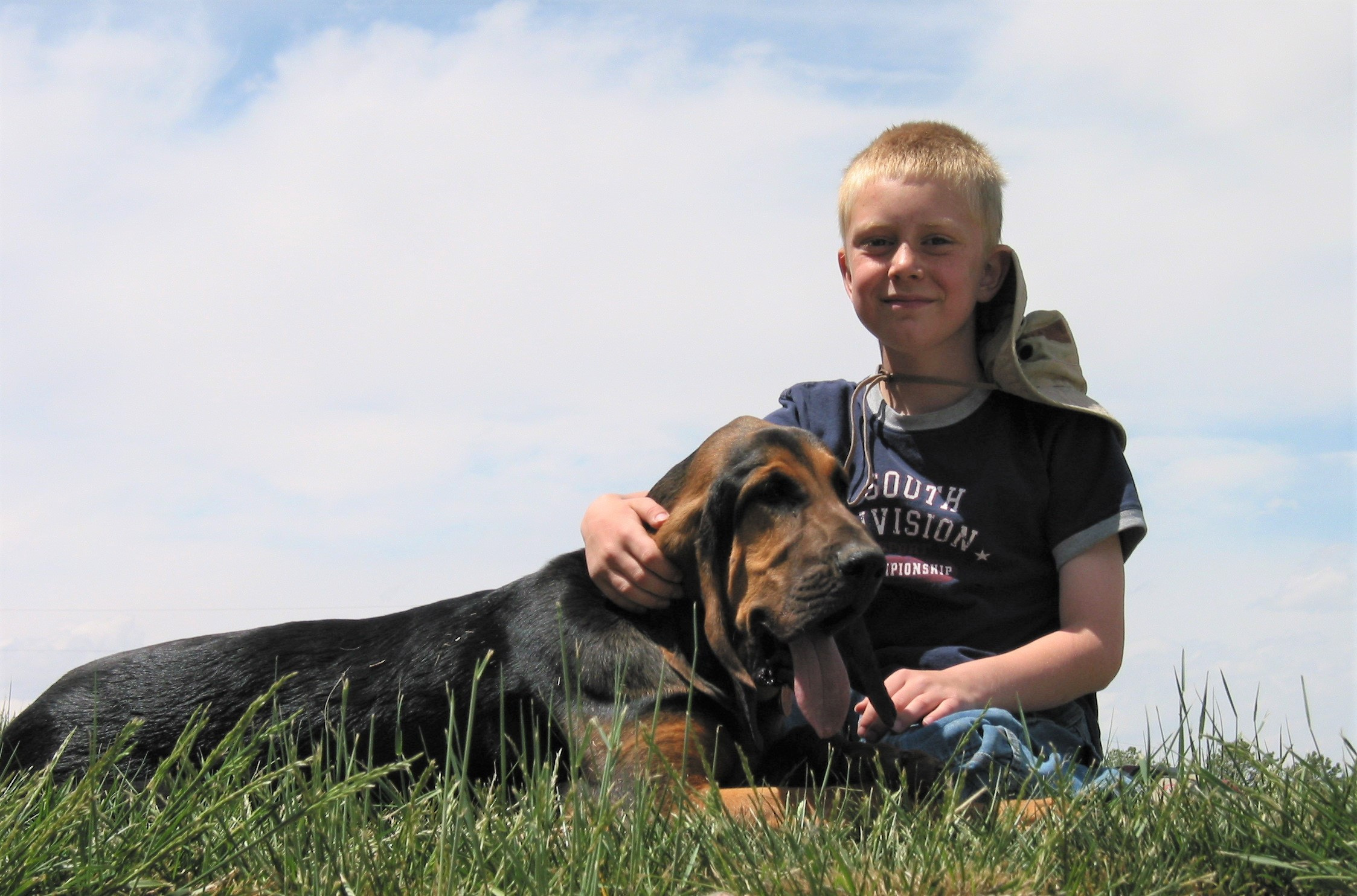 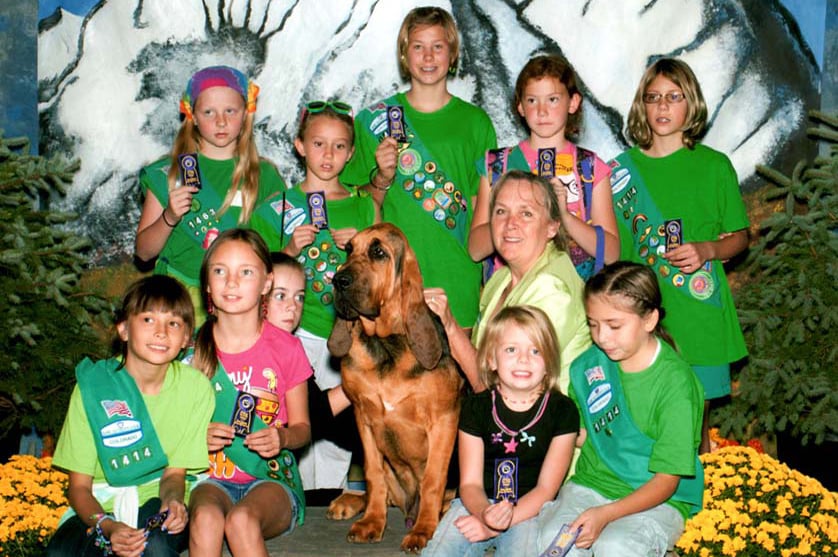 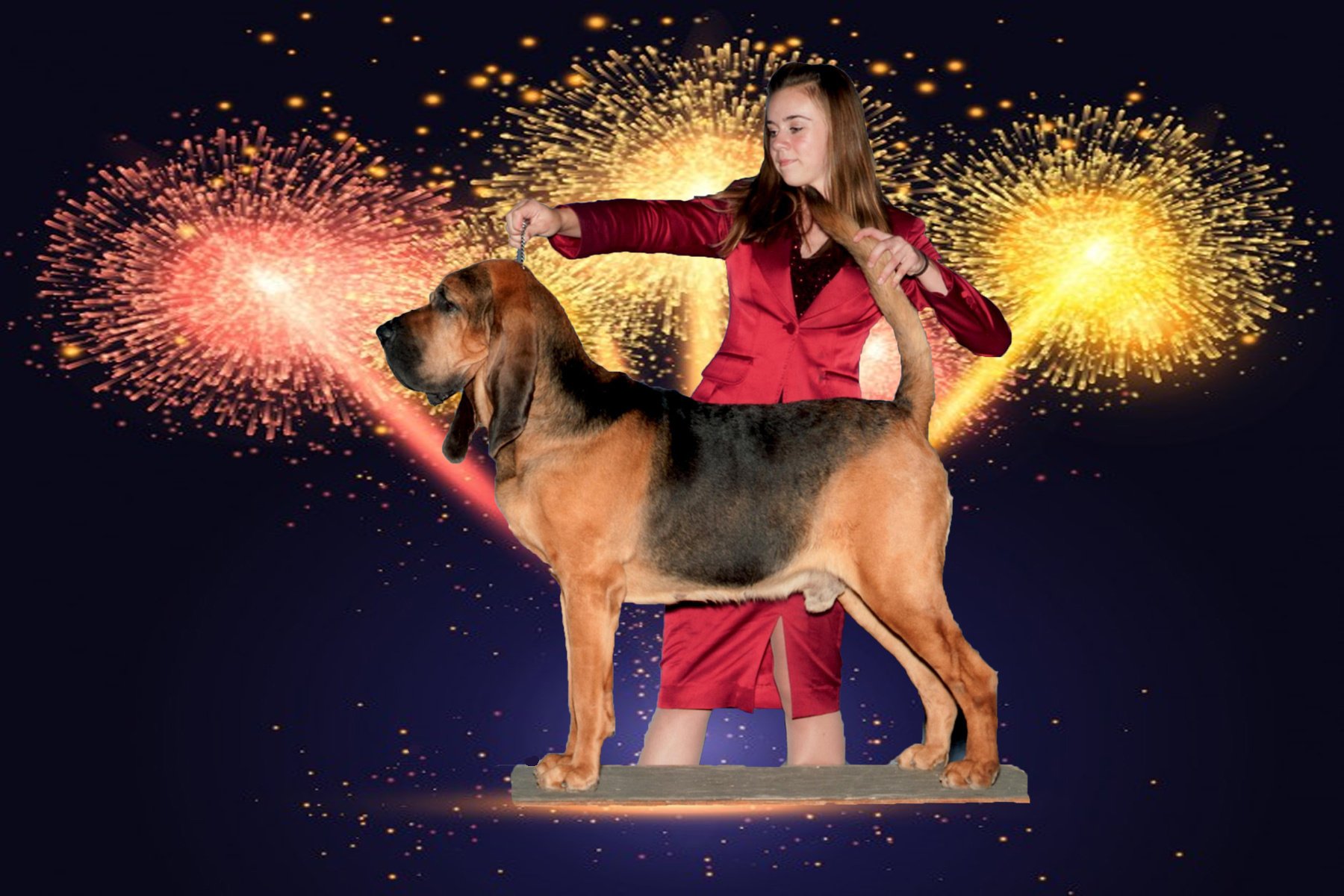 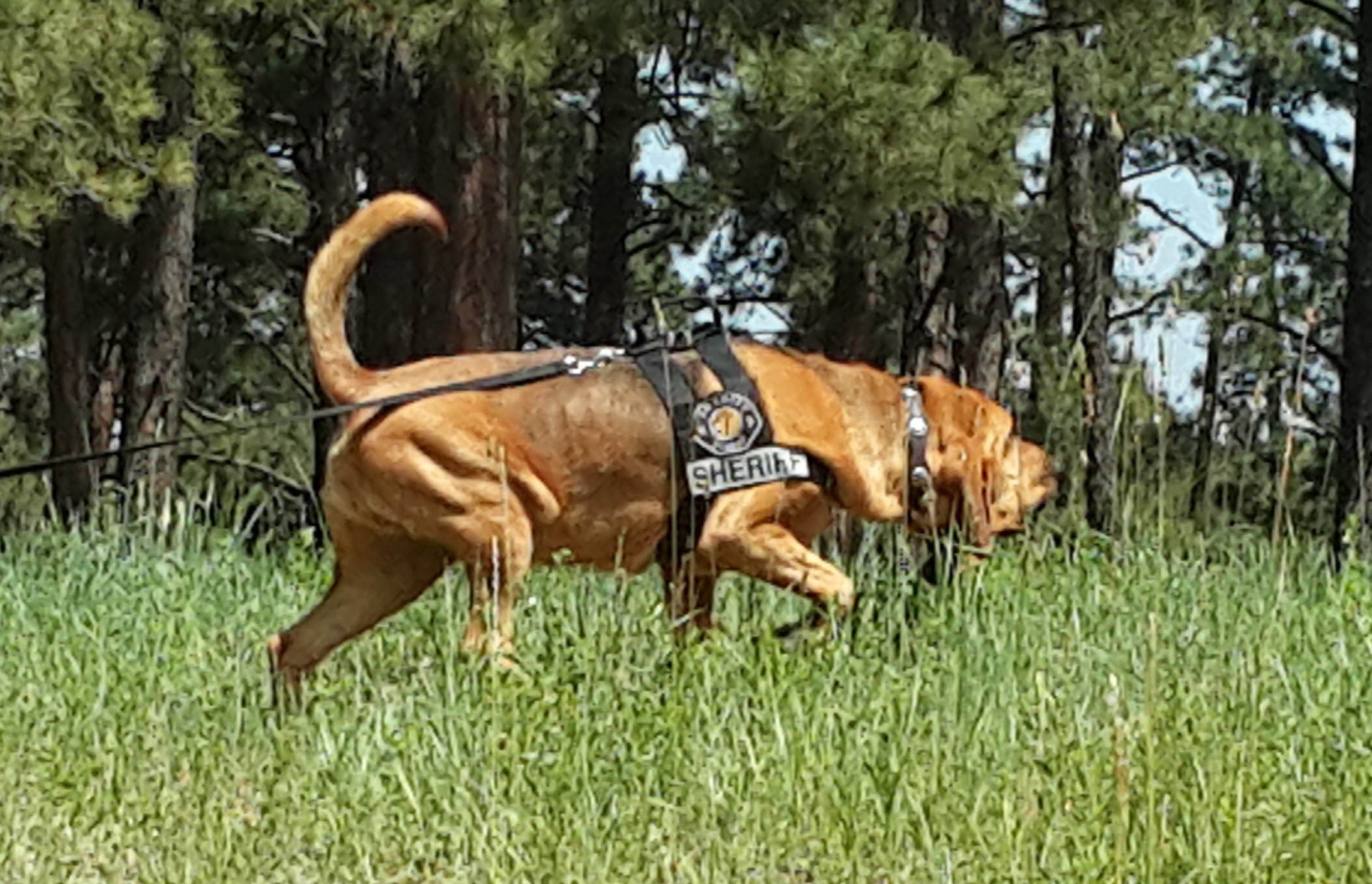